Transferable Digital Notes Project
Home
I am always asked by friends what is Bitcoin. It turns out to be something a bit difficult to explain. Just saying that it is an interesting technology, a lot of (unfulfilled) promises and a whole lot of bull does not seems to be enough. Maybe this will be a bit more satisfactory.
Let’s take this scenario: He has two possibilities:


Note: This is not 100% true. Peter must make sure that the notes are issued by the Federal Reserves, the mother of all financial institutions.

Some people find a lot of trouble with these transactions. Let’s mentions a few of the “issues”:


Mike and Peter have read the Satoshi Nakamoto Bitcoin: A Peer-to-Peer Electronic Cash System paper and The Bitcoin Manifesto book by Allan J. Stevo and they decide to be part of the revolution. They did some research and most of the web searches lead them to websites where they have to open a nominal account, like a bank account.

Because this was not the idea they ask for help and they were told that they need a “digital wallet” each. Another search and they go to bitcoin.org same place from where they downloaded Nakamoto’s paper. They skipped the Get Started and went directly to Choose your Bitcoin wallet. They skipped ‘Help’ and from the next screen they selected 'Desktop wallet for Windows' and then again ‘Next’. The things got a bit more complicated. It seems that it was not as easy as going to the store and buying a wallet.

They opted for a ‘Control’ wallet and clicked ‘Next’ where thinks got even more complicated. Do they need “Two-factor authentication (2FA)” or maybe a “Bech32 is a special address format”. I’ll spare you of the rest of the details of purchasing a ‘digital wallet’ and explain what actually it is.

Here are the graphical interfaces of a few Wallets. 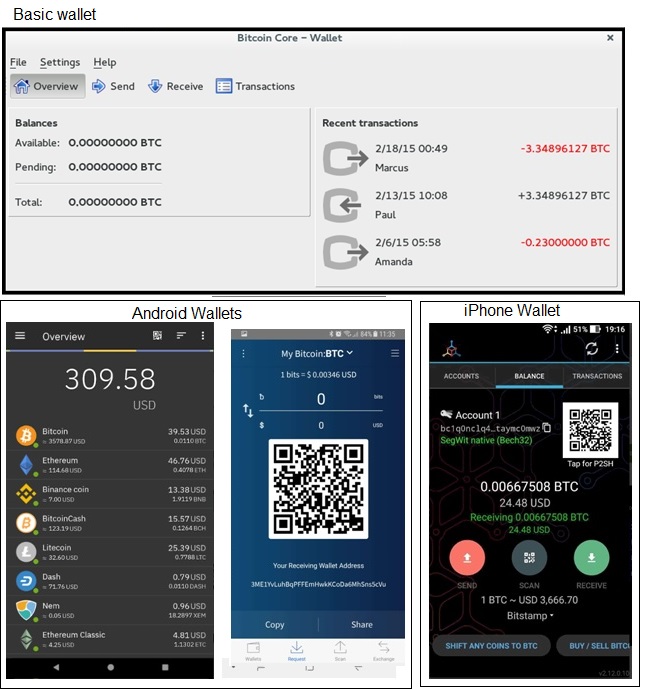 You can always download a wallet for your iPhone or Android phone.
Now let’s perform the scenario using Bitcoins.

So far everything looks kind of OK. If Peter want to spend his Bitcoins he has to find a merchant with a Bitcoin wallet (good luck) or some friend who may want to perform a Bitcoin transaction for whatever reason (what are the chances).

Here are three problems with the Bitcoins.

Let's continue with the next step:

Here is the biggest problem. All prices are in US Dollars. The wallet can easily convert the price in Bitcoins but the problem is that this conversion changes every day and so Peter's buying power. This means that Peter and Mike’s wallets are no holding digital cash. They are investment accounts.
Here is how the Bitcoin price history.

And this is why the Bitcoin attracted billions of dollars. And because this is an investment, Wall Street must be in. So you don’t need to carry around your Bitcoins on your phone, especially if you want to invest large amounts -p0, you open a traditional broker account and buy and sell Bitcoins instead of GM or Microsoft. So much for the democracy, independence from Wall Street and freedom of finances promised by Satoshi Nakamoto and the Bitcoin Manifesto!
The story with the guy who bought pizza with Bitcoins in 2010 and paid millions in today’s Bitcoins is very catchy. To be fare, there are a lot of guys who invested in Bitcoins and were left with just enough money to buy a pizza.

Bitcoin system is just an investment/betting game and everybody wants a piece. And not just gamblers, thieves and crooks; scientists, academics, governments, publications, software companies, beltway bandits, Arab sheiks, Swiss guards, a voice, the second butler etc… want in. This is not just a run of the mill investment bubble it is something for the twenty first century.

Indeed, equals or peers when they are numerous become a kind of democracy, and therefore demagogues are very likely to arise among them…
Aristotle, Politics, Written 350 B.C.E